Back to the Future Day

In celebration, we decided to make a gingerbread DeLorean. Our resident artist decided that obviously the car would need glass in its windows. Our previous attempts at sugar glass had ended in what could kindly be called failure, so I was not confident. Ed assured me that the purchase of cream of tartar would make all the difference. It turned out he was right. Behold him punching through a sheet of (sugar) glass:

I especially enjoyed the crash-tinkle sound it made. Apparently this is how they used to make glass for movies when they needed it to break, though nowadays they use resin. Having had to try to scrape bits of sugar glass off the work surface, I can see why.

We made the parts of the DeLorean out of gingerbread and glued them together with caramel, which went fairly smoothly except for the windscreen, which broke as we were trying to get it into the right shape and then warped as we install it. But I think after a trip to 1955 and back, it would probably be starting to look a bit battered. Anyway, here it is in all its glory: 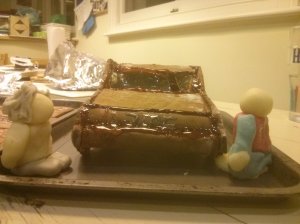 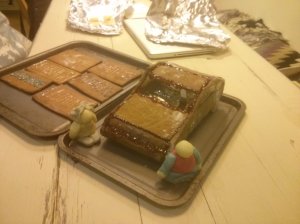 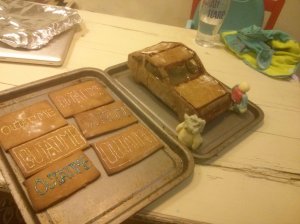 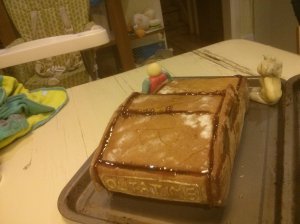 Sadly it was in a collision with some very hungry people: 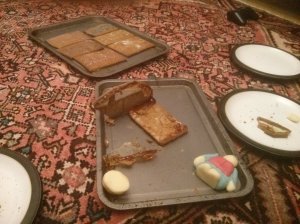 This entry was posted in Uncategorized. Bookmark the permalink.

2 Responses to Back to the Future Day