Once upon a time, several countries decided to band together for an unprecedented journey. 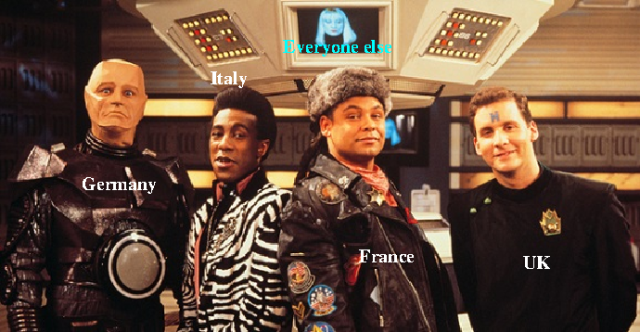 Germany The only one who knew how to do anything useful. Always apologising for past transgressions.

Italy Unique style. Adorably open with the fact that they didn’t give a toss about anyone else.

France Just wanted to eat and lounge about all day. Occasionally moved to action, but it quickly died down.

UK Completely up themselves and 100% convinced that the team would collapse without them.

Everyone else Tried to steer the ship, but every so often just lost it and banged their heads against the wall instead.

Now try to imagine it with just the UK, or the show with just Arnold Rimmer. Oh, wait. You don’t have to imagine. That show actually exists. It was called The Brittas Empire. I watched it in the nineties, and thought it was hilarious. Turns out, that’s because I was an idiot. There may be a metaphor for something here.

You can experience the terribleness yourself: here’s the first episode on Youtube. If you can’t bear to wade through it, or if you’re reading this at work (perish the thought!) here are some things that I, and many other viewers, apparently thought were funny:

– Alcoholism is the best solution to relationship problems.

– It is wrong to criticise littering.

– If builders don’t do a good job, you should just accept it. Anything else is rude.

– People in service industries have no obligation to be nice to customers.

– In fact, people in general have no obligation to do the jobs they’re employed for. Employees should just be left alone, and if you try to get them to work, you’re in the wrong.

– When you have an area of expertise you should have a right to a job in that area forever, even if there is no call for that expertise.

And you know what? All these attitudes were familiar. I just thought they were normal at the time. If the past is a foreign country, it’s one whose visa requirements must include rose-tinted glasses for it to be properly appreciated.

This entry was posted in Uncategorized. Bookmark the permalink.